I wanted a coffee - I ended up with an electric motorbike 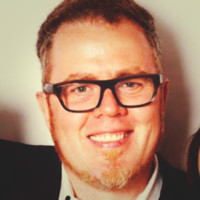 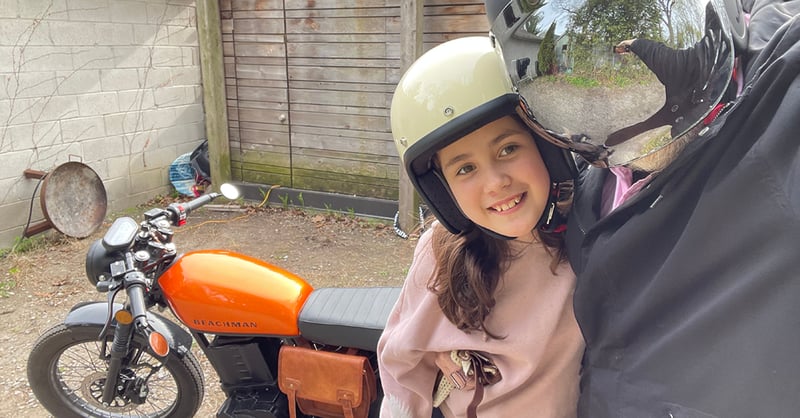 It started with needing a coffee.

I was out walking with my daughters on a cold Saturday morning – perhaps feeling the lingering effects of the previous evening’s libations – and committed to trying to close the exercise rings on my watch, no doubt motivated by the inevitable congratulatory call from Tim Cook on my 2-year streak of never missing a day. (Spoiler - he never called!)

I passed by a café I had not yet visited. Looked nice. Inside I ordered a latté and realized that I was surrounded by what seemed to be retro-styled motorbikes.

I asked the barista if people often order a motorbike with their coffee. He replied that he shared the space with a company that sold the bikes. The bike store was not currently open, but the very cool-looking products were there on display.

I’m not a motorbike person, but I am obsessed with design and I found myself staring at, and appreciating, the minimalist balance apparent in these ‘café racer’ styled bikes.

As I looked more closely I realized that they were fully electric, which piqued my interest even more. (We switched to an electric car a year ago and have been loving it.)

I looked up the company on my phone. ‘Beachman.’

Is this a product or an attitude?

I was greeted by images of clever-looking people riding these aesthetically pleasing bikes in interesting environments.

What struck me was that, although a lot of effort and thinking had obviously gone into the technical and visual design development of the bikes, the focus here was not really on the hardware – it was on a feeling – specifically, what it would feel like to be able to spontaneously cruise around in a joyful way, with no destination. Apparently – based on these pictures – also while looking cool (as in, fell out of an American Eagle ad cool).

This sparked something in me, as I remembered this feeling from childhood (well, not the American Eagle part) — and had recently rediscovered it on a trip I was so fortunate to take to meet a client & friend in Austin to watch the Formula 1 race. During my adventures there I discovered that the best – and most fun – way to get around Austin was on rideshare electric scooters that were lying around the streets, everywhere.

Just pick up and go. Wind in your face. Easy.

Cut to… The birth of a brand.

Beachman was co-founded by Ben Taylor and Steve Payne.

Ben had been living in Vancouver and exploring the idea of creating a lifestyle brand that would harken back to ‘60s design aesthetics. He had an Instagram account dedicated to this idea that was gaining a following.

In the process of trying to find an affordable and eco-friendly way of getting around Vancouver, Ben experimented with mopeds of various types, including a Tomos (a basic moped that has a small cult following). None quite fit the bill, revealing a potential opportunity – the possibility for a new product: a café racer-styled daily drive. Something that would be accessible, unique, beautiful, and fun. An eco-friendly way of booting around the city for anyone wanting a different kind of ‘wind in your face’ experience. 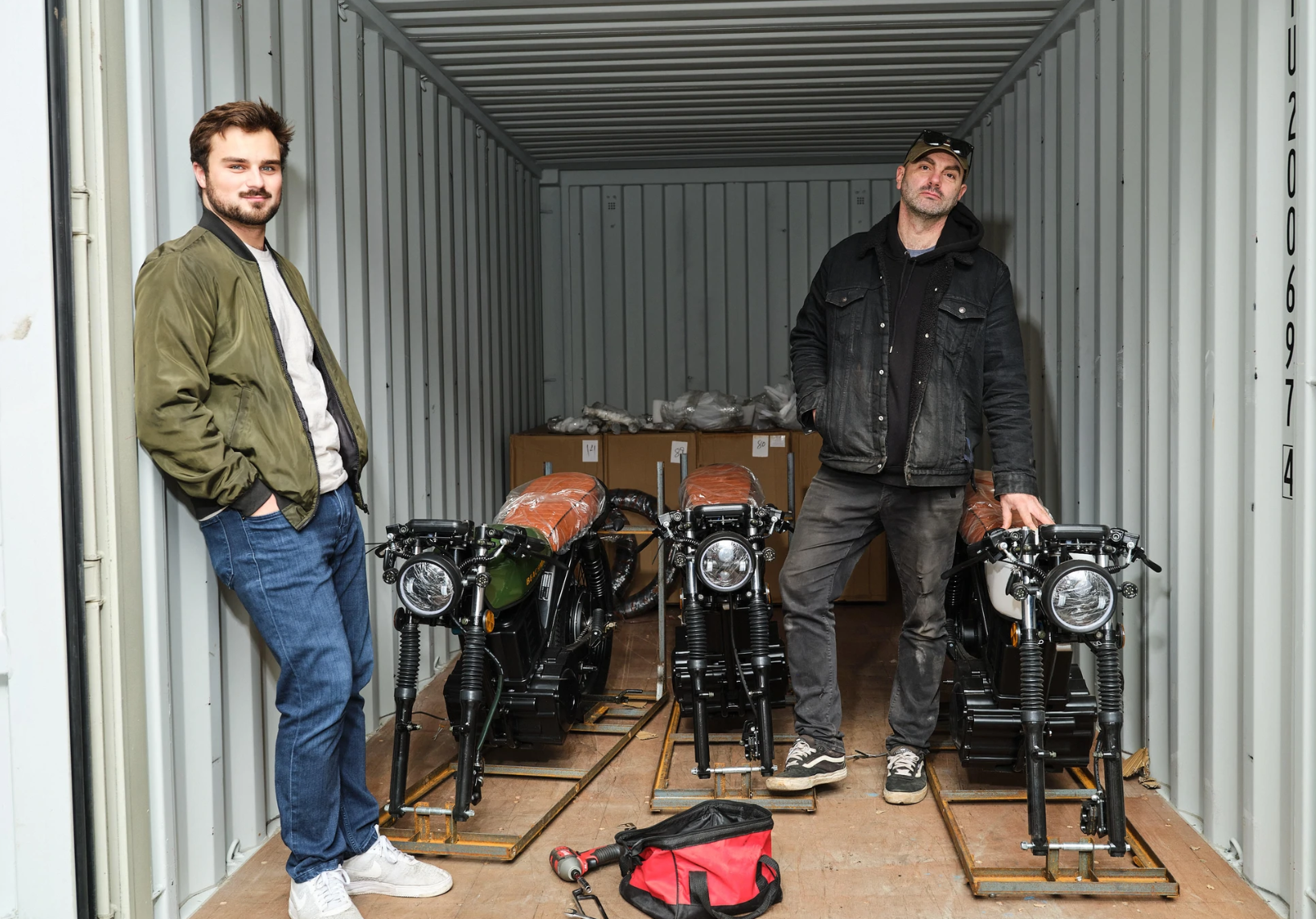 Meanwhile, Steve, a veteran TV audio engineer, had been spending his spare time building custom motorbikes out of spare parts – part of a community of mod enthusiasts. It’s a pursuit that is at once technical, iterative and creative. Steve had produced some content from these pursuits – his YouTube channel having gained over 20,000 subscribers.

One day Steve and Ben were introduced (through a childhood friend of Ben’s who was a barista at a local coffee shop), and the opportunity was obvious – Beachman was born. The idea of going fully electric followed shortly thereafter.

Steve had been interested in electric vehicles for a while – having 15 years earlier used a forklift motor with 12 batteries strung along the backseat to electrify a VW bug. With evolutions in electric power, the potential for a fully electrified Beachman café racer was obvious.

“That initial conversation was around having an entry-level motorcycle, basically for enthusiasts that weren't quite ready to get a big one. Steve said, if we just put pedals on these, we meet the regs, it's suddenly an e-bike for everybody. Okay, that makes a lot of sense. Let's see what we can do!”
— Ben Taylor

The ‘café racer’ style bike was born on the streets of post-war England in the 1960s. Based on cobbling together available parts to make custom bikes, the make-your-own bike subculture tied naturally into the emerging rock and roll movement.

The idea of individuality, non-conformity, resourcefulness and pride of ownership were important for Steve to express in the design of the Beachman.

“Part of the way I’ve approached building bikes is around pride of ownership. Having something that isn't common or generic – something you can customize, change over the years.”
— Steve Payne 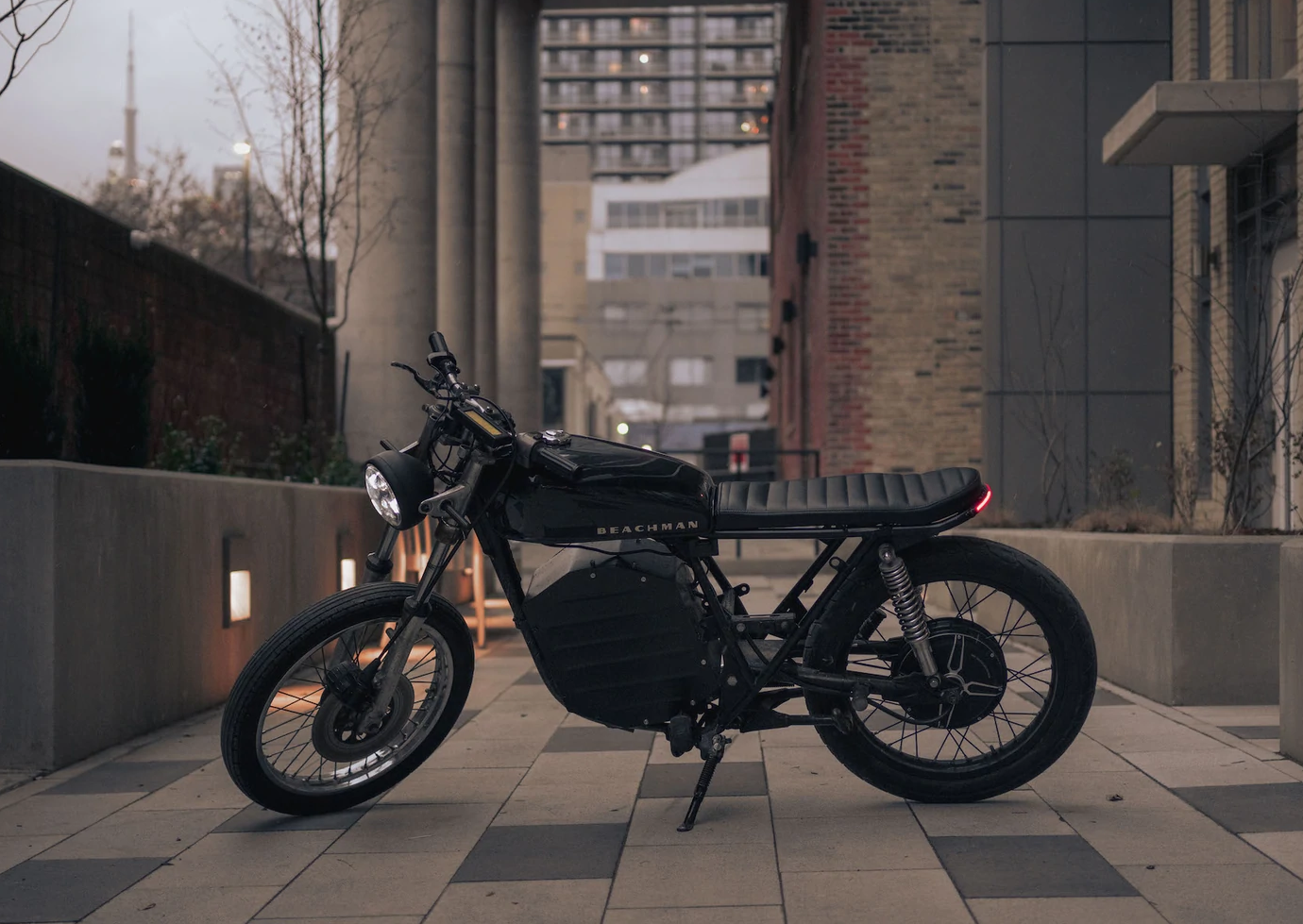 Bike Zero fun fact: the prototype’s seat was made of a skateboard, which was discovered to have the perfect proportions.

Steve leveraged his house line of credit to fund the first order of 30 ‘Founder’s Edition’ bikes, and did so again for the follow-up order of 105 ‘Second Edition’ bikes. Six months after those first 30 bikes were ordered, the duo launched a successful Indiegogo campaign, which fully funded the now sold-out and soon-to-be-released ‘64 Edition.

The upcoming latest-and-greatest is the 'Beachman '64' model, slated to be released this summer, and already sold out. 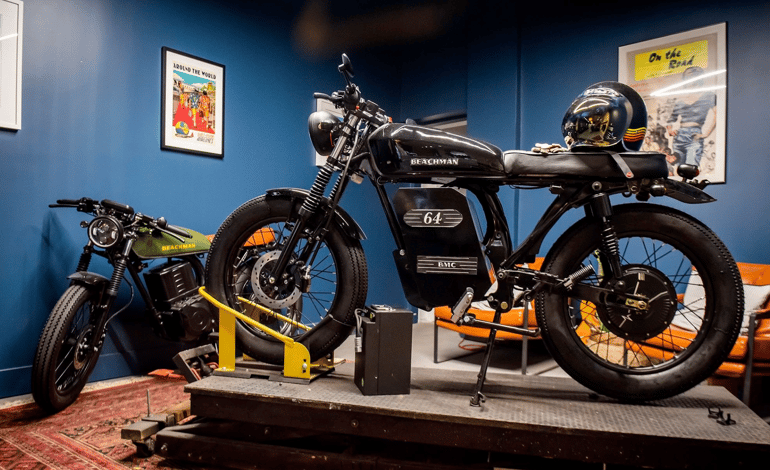 Housed in a Dundas West space in downtown Toronto – shared with that cheeky café whose convenient latté lured me into entering – Beachman also offers a carefully curated group of purpose-built merchandise that Ben has worked on designing and manufacturing.

The goal has not been to mass-produce items that can be cheaply created and branded, but rather, to create well-ideated, well-designed, well-made unique items that live up to, and represent, the Beachman lifestyle aesthetic.

(Author’s note: if I hadn’t already been ‘ready to buy’ once I discovered these electric motorcycles, I surely stood no chance when confronted with a minimalist shelf containing a small set of carefully designed Beachman-branded items such as riding gloves, a pocketbook for taking notes, and a sophisticated looking lighter.)

Getting a product like this to market isn’t easy. Much work goes into planning, and unexpected surprises (sometimes unpleasant) are par for the course.

One of these challenges was a direct result of the recent supply chain crisis. The bikes were delayed making it across the ocean, and when they arrived, Canada Customs decided to hold and inspect all the bikes. Beachman was charged delay fees and shipping container rental fees for what turned into a lengthy period of time.

As Steve recounts, “Our shipment was ready and packed but kept being delayed. We're basically in line behind Canadian Tire and Walmart and everyone else – and of course, we're gonna get the boot over and over again.”

“So when we finally got on the water and the shipment arrived, customs decided they needed to have a look. They were also backlogged, and what promised to be no more than five days turned into 30,” he explained of the gruelling waiting game. “The shipment just sat on a rail car, and we learned you have to pay CN a lot of money per day for that privilege.”

On top of this, the batteries, always considered a dangerous good, had to be shipped separately and made it to BC just barely before the mudslides happened. Of course, no batteries = no e-bikes. The store they had rented sat empty during this period.

“The only reason our heads weren't setting on fire was because we had just finished our Indiegogo,” Ben recounted. ”We were in this fortunate position of having funds in advance. That funding actually happened maybe two or three days before customs started holding our bikes. And so we knew we had some runway, but we had to be very patient.”

Since then, word has started to spread organically. Riders are subjected to ‘what is that’ stares, followed by questions.

Given that you don’t need a motorcycle license to own and drive a Beachman (they are technically eBikes, with pedals, and are officially speed-limited to 29KM per hour), they are accessible to many.

Plans are also in motion for a full-speed, fully-legal highway-calibre motorbike. Expansion into the U.S. is being planned, but this will be predicated on developing a proper dealer-support network.

The feeling of improvisation and discovery that’s represented by the brand, is itself the center of gravity for Ben and Steve as they grow the business. Any choice that would detract from that feeling is avoided. That means growing more slowly, and with true intention. Not sacrificing values for low-hanging fruit or quick wins.

This is a guiding principle that has emerged as the single most important factor in the growth of our own brand, Titan ONE, and I believe it should be the aspiration for every brand. When you are trying to create something meaningful, you have to be willing to define and stand up for your values. That’s the only way to ensure that you protect the energy that unifies your people and makes your brand unique.

It’s also the energy that will draw the right customers towards you. When that happens, business thrives in a deeper, more sustainable way. And it’s not something you can fake.

So as a convert to the Beachman brand, how has the reality compared with the brand promise?

Stella looks a little dejected. She says she was hoping to go for a ride on the Beachman with me.

So I change my plans. Work can wait. We get on the bike and go for a silent glide, cruising the streets of High Park and Baby Point. The sun is just beginning to set. There’s a beautiful gold hue on the trees.

Stella comments that the clouds look amazing. I can’t help but smile. Wind in our face. Everything is right now… and the road is wide open.

Making the Switch: Tips for switching your Quuu Integrations

Having Quuu integrations problems? If you’re attempting to integrate HubSpot with an existing Quuu account, you might run into the same roadblocks as...

What we've been hearing about marketing strategy and choices...

We’ve been having such interesting conversations about marketing strategy over the last year with clients, partners and colleagues, so I wanted to...

What I’ve learned from 25 years in business

I generally don't spend much time looking back, because I’m busy focusing on the work we are doing to help our clients. There’s a lot to do. And I...